THIS PAGE IS IN PROGRESS TO UPDATE

The nose and eyes are absent. This creates a vacuum which gives more power to what we can see. Science has shown that when a person loses one sensory capacity, the others senses can compensate by becoming more acute.

The vacated parts of the faces are in front of us, their absence holds our attention. At first, the spectator’s gaze is attracted to what is missing. Then it slides towards the mouth which becomes the place where everything is concentrated. Thus, the vacuum, the disturbing absence, provides an additional presence for the mouth which now must remedy the lack of identity of the eyeless face, incapable of communicating or being deciphered.

The sound which pours out is all the more powerful in the absence of the other senses. Since sound cannot be represented, I have accorded the vacuum a concrete role as an element of the scenography. In other words, the vacuum comes into existence through the sound.

To remove the eyes and the mouths of the people isn't an act of mutilation of the photographs in this series. This act sublimates the ‘real’ by injecting a different vitality.

STATEMENT OF THE PROJECT

I am looking for one sound. One sound which could represent Humanity. Each mouth shouts the same scream like a chorus in the face of the human condition.

In this series of photos with an underlying theme of violence, the photographs don't speak about agony, confusion, anxiety, horror... thus are quite different from the painting by Munch, whose title I borrowed for this series. The characters are not terrorized. They are rebelious, committed, militant, belligerent characters. Several mouths are voicing the same scream; the scream of all times and of all the places. No eyes, noses or mouths are isolated on the faces. That makes it possible for them to share a single soul, the soul of humanity. That's as the aria in an Opera: the singer sings the aria after the recitative when the story is reaching a point of no return which only the aria can take forward.

We are in the 21st century in a real country. A new law that introduces a range of·restrictions on women, and permits, among other things, marital·rape. The law was approved by both houses of Parliament and signed by President. Women and and rights groups abroad have protested three parts of the law especially.

One provision makes it illegal for a woman to resist her husband’s sexual advances.

A second provision requires a husband’s permission for a woman to work outside the home or go to school.

And a third makes it illegal for a woman to refuse to “make herself up” or “dress up” if that is what her husband wants.

About 300 women, facing an angry throng three times larger than their own, walked the streets to demand that Parliament repeal a new law that introduces a range of·restrictions on women, and permits, among other things, marital·rape. The reaction was immediate. Hundreds of men poured into the streets to confront the demonstrators. “Death” the counterdemonstrators cried, encircling the women.

In the video, the men are prisoners of the word they are shouting : "Death". We don't hear them, we just see they are screaming. The men's chants condemn the demonstrators but it is also a self-condamnation through the absurdity and the vanity of this power they claim for themselves. The women who are the subject of news item are not visible in the video because they have no legal existence through this law.

On the pictures, the faces of dolls don't have a mouth. female sex from plastic sexdoll replace the real mouth. These blurred doll pictures reflect the inferior even non-existant status of such women. The only clear part of their face, the mouth, about which the State has spoken is not to be heard, only to be used. Obcenity affects all of the mouths in the installation beginning with those of the men. What is more obscene than demanding death to those who only wish to exist as persons. 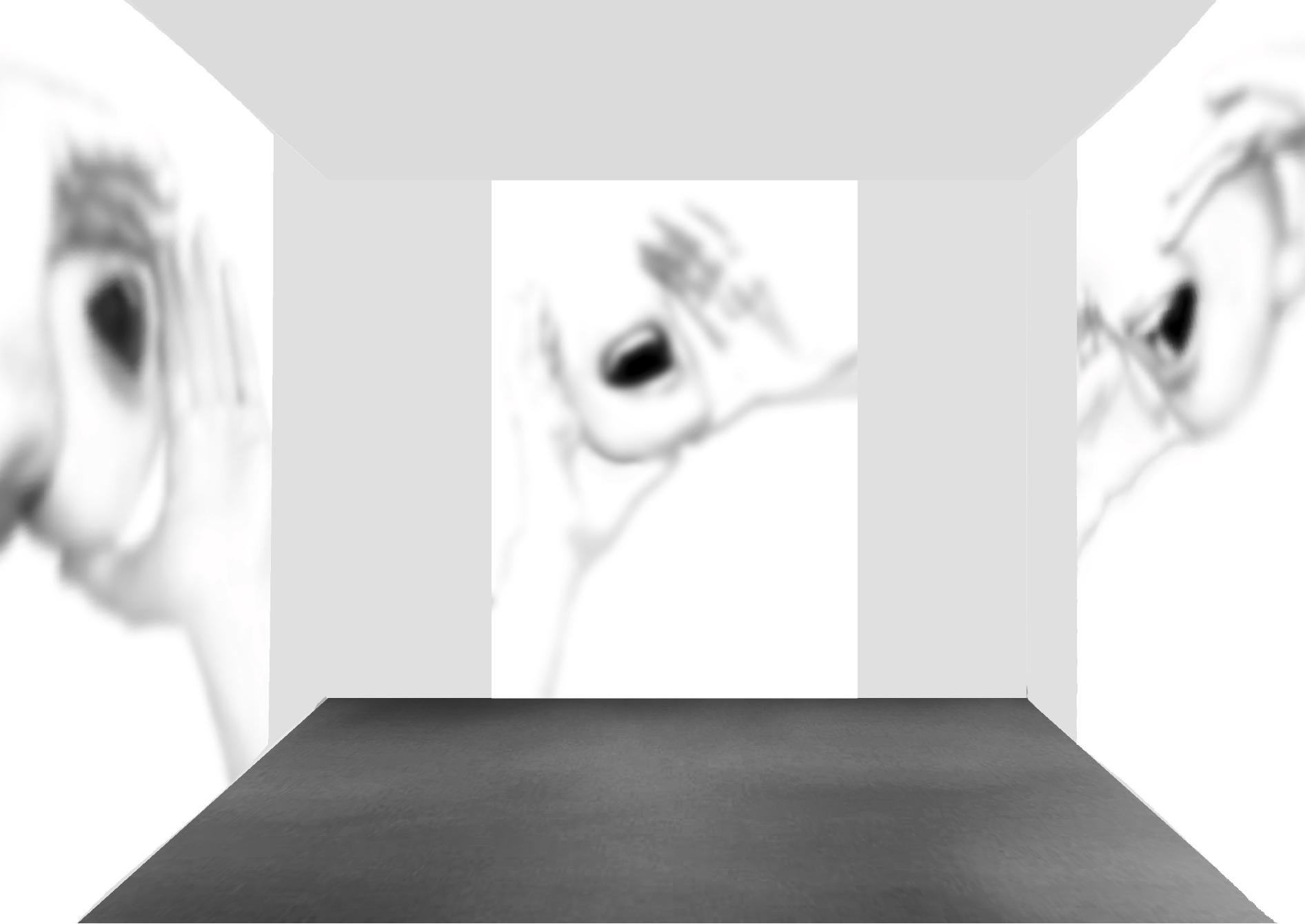 - 4 photos : as large as the hight of the wall ( max 4 meters; but it all depends of the possibility of the step back.)

PRINCIPLE : Each of the 4 photos are on the 4 opposite walls. According to the photo which a person is looking, he/she hears in her/him earphones, one of the four questions (one loop (2 min) with different tones):

What do you say ?

Whom do you address ?

Do you spoke to me ?

STATEMENT OF INTENT ON THE PROJECT : The 4 photographies of the "Echo" series speak about the malaise of the communication in our societies. Everywhere people complain not to be understood, not to be able to express them while often they speak only about themselves and don't listen. The endless requirement that we have from people results in a relational impasse.

ARTISTIC STATEMENT : The erasure : I work on the erasure of the forms. The blur allows me to work the passage from a moment to an other. The speed is in suspension there. I try to find the moment when the forms are hesitant to exist and then are hesitant to disappear. This hesitation is translated in the form with a wider and more confusing print. I let to the form just enough voice to murmur its existence and just enough presence to glimpse it when it is passing. The framing : The framing is a space of representation, a stage. It proposes a scenography. The position of bodies opens a place to breath. The Black and White: the use of the Black and White prevents the movement to reach our retina in a diminished way. Thanks to the BW, the movement can be distinguished across a flow of informations. It isn't reduced to a variable importance in which it isn't essential. The BW extricates the movement and the shape from the gossip and from the noise. It allows them to appear in a "ring box" of silence. 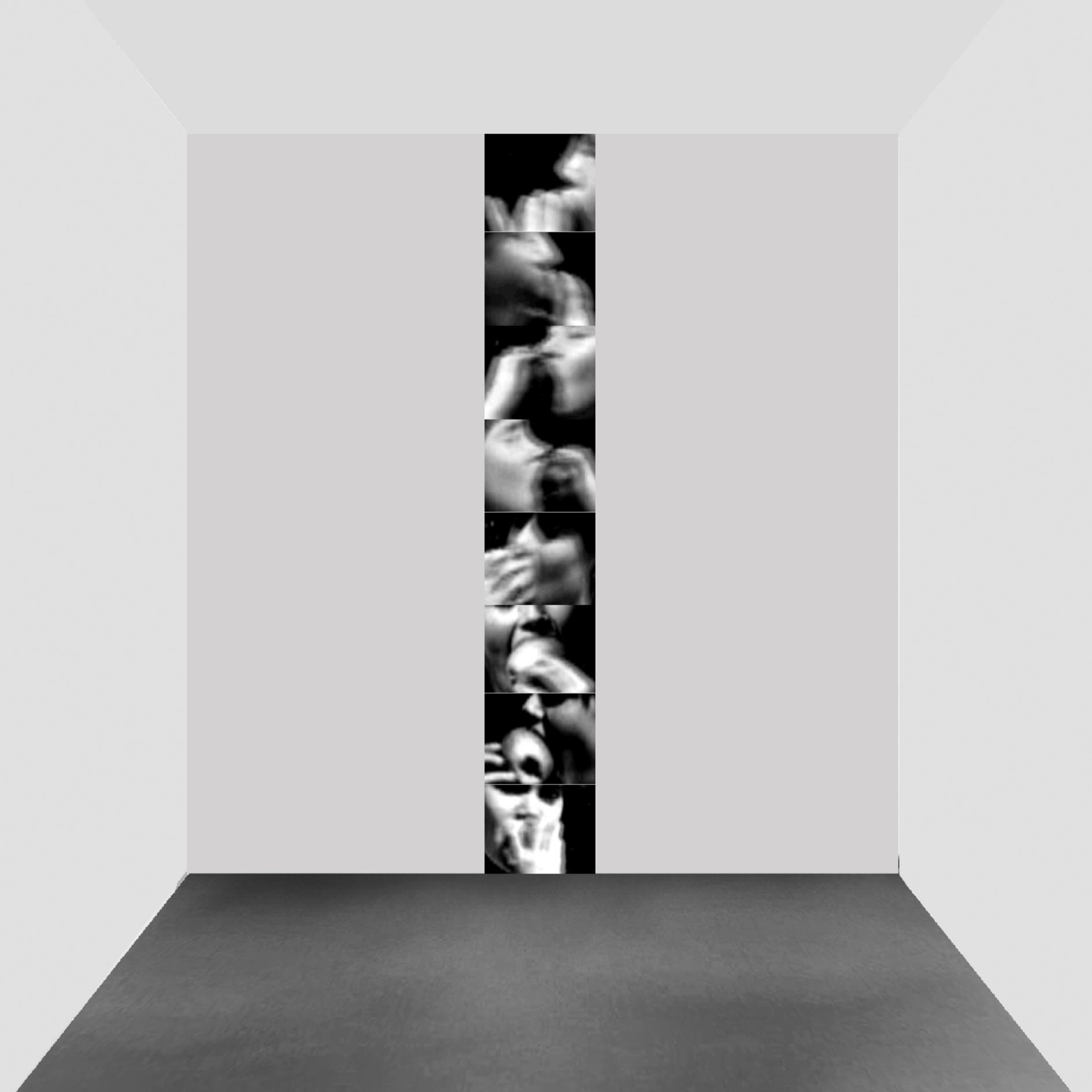 8 images on the wall from the floor to the ceilling (the size of the pictures depends on the height of the wall). The pictures are hung in column, one above the other. The eight pictures compose what the title invites us to imagine : a trunk.

From the pictures, people eat apples. The open mouths dominate the framing space so much that we might think the mouths are swallowing the fruits. An animal rage seems to animate people as assailed by hunger.The faces orientation, turned alternately to the right and then to the left, is part of this feeling of vital urgency. Closed eyes lead to the idea of an enjoyable moment.

The gradual erasing of the image sharpness, in an upward direction, creates an internal rhythmic movement to an abstract final shape in which the apple and the face merge just in an only one shape.

The Talking Tree is a symbol of communication in French-speaking West Africa. Under their shadows, public spaces for meetings and chats take place in the villages. The semantics of the term "tree" in many african languages refer both to the meaning of a vegetable species and to the meaning of a remedy or medicine : "the human being is the remedy of the human being" (wolof adage).

The use of this expression spread out of Africa has imperceptibly changed from the focus on the tree to the anthropology of dialogue as the source and means of agreement between protagonists. With the title of the series "Talking Trunc", the first motivation to create this specific space of encounters no more exist. If the branches and the foliage disappear there is no shadow. The fundamental reason to be under this tree no more exist. Is the tree sick, is it dead ? The irreducible conflictive nature of social relations and between opinions, seems to have lost a place to resolve the problems and to communicate.

The apples seem to come from the missing branches. By greedily swallowing the last fruits of the apple tree, the mouths are condemned to disappear too. The human specie condemns itself when it destroys its environment: "we are cutting off the branch we are sitting on". 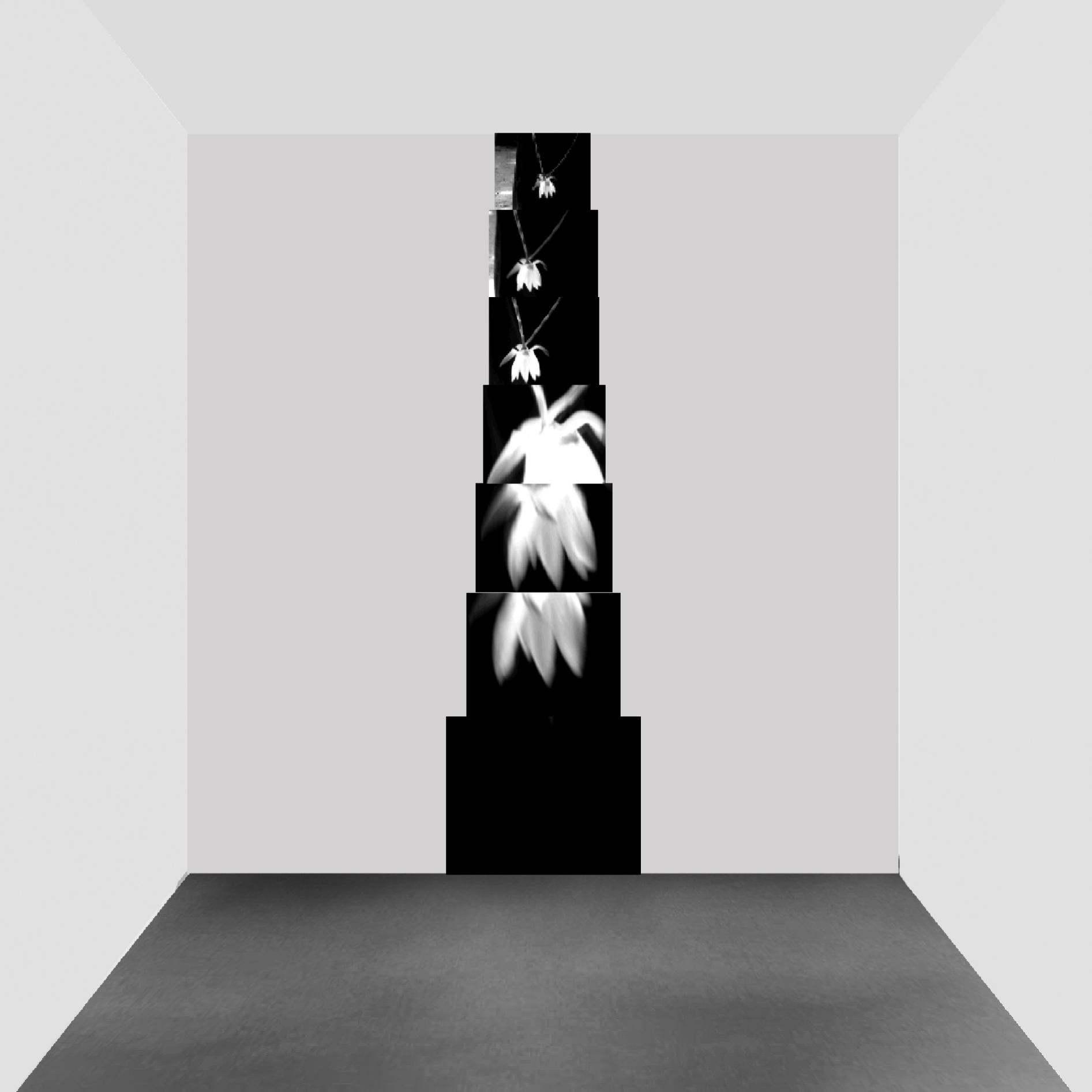